A picture and a thought As many of you know, I live in San Pedro Sula, Honduras. Although the picture right next to these lines is not from my home city, it is a landscape of the country’s capital Tegucigalpa. Still, I think the view is breathtaking.

I visited there last weekend to attend a family engagement. The four hour drive was hard on the kids but they all enjoyed the green mountainous scenery, well, truth be told 2 of 3 fell asleep after the first hour.
A long time ago I was channel surfing as we all men do after the invention of the TV remote, I came across “Jeopardy” and was intrigued by the question that covered almost the entire screen:

Only Capital City in the world that does not have a railroad system.

It seemed to me like a $1,000 question, mostly because I didn’t know the answer, or at least I thought I didn’t.

The contester failed to respond and the camera zoomed into the little blue square that flipped revealing the white letter answer: 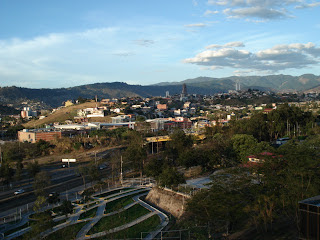 I will not go into the details of the sordid story behind the reasons of why we don’t have a rail road but it gave enough material for a 400-page book published back in the 90´s.

It was not the original Honduras’ capital but the legend tales it became so 1880 on account of some high-society gossiping about the then-President Marco Aurelio Soto´s wife in the former capital city Comayagua. It is amazing all the things we men do for our women!
Hope Mrs. Soto thought it was romantic!