Guest speaker at a local college.

Many thanks to the class of World Lit at Unitec San Pedro Sula for reading FIREFALL, and for asking so many questions during my guest speaker day in their class room this week. 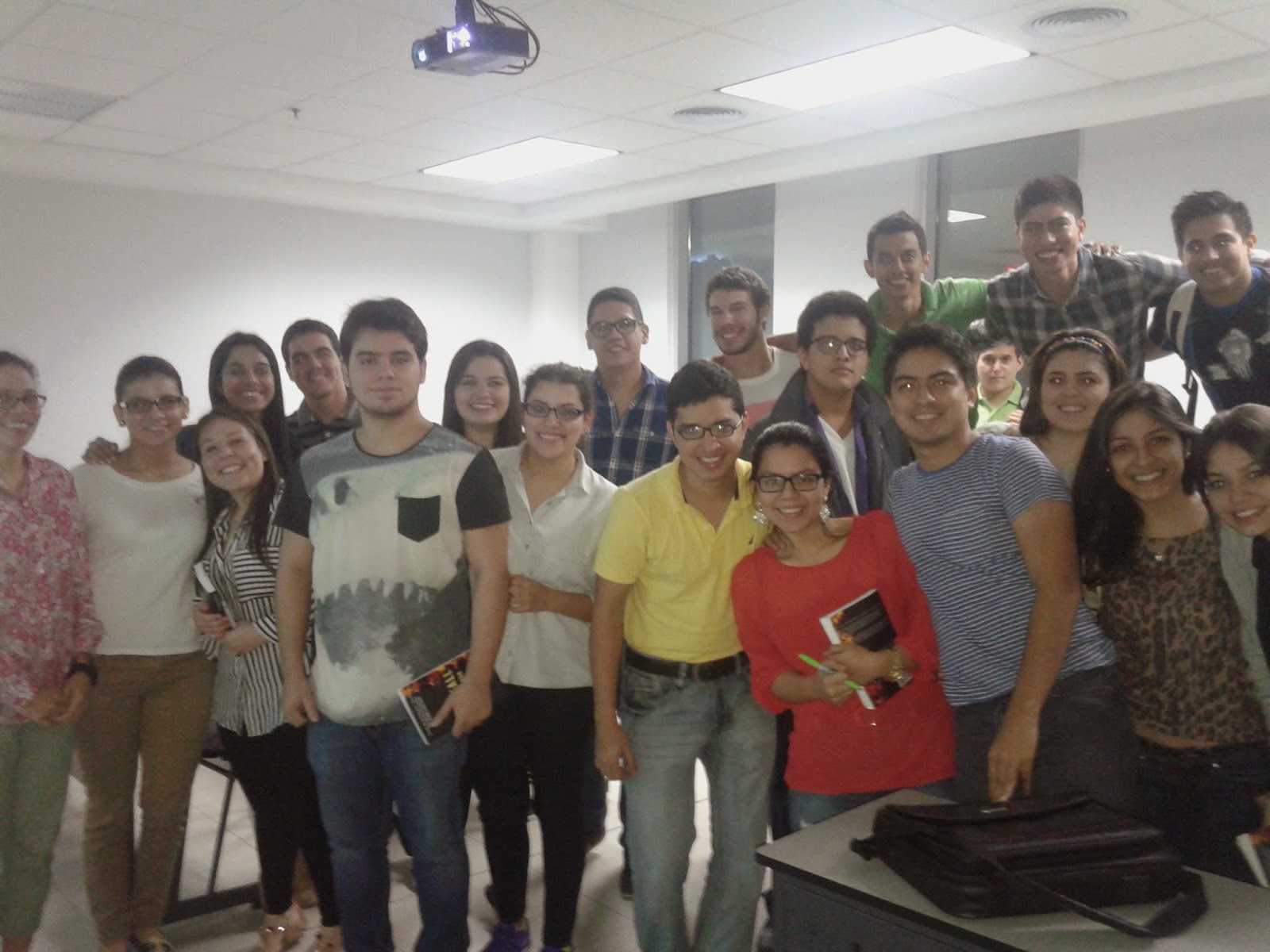 Glad to see young ones reading for the benefit of future generations.

Firefall has a new 5-star review.

A 5 star review for Firefall. This time the reviewers calls me a "rare talent" and something about Mickey Spillane that is not quite a comparison. Loved it!

I'm telling you, hearing from strangers loving ones work is GOLD.

Happy to see Once Cipotes is getting noticed.

In this article, Indiewire lists Once Cipotes as eligible for the 2015 Oscars.

I'm proud to say I wrote the screenplay for that movie, so I'm happy it is getting some traction.

Thanks to fellow ITW member Joe Moore, I was a guest blogger today at The Kill Zone, cited as 101 best sites for writers.

I chose the thrilling subject of prison breaks that range Harry Potter to Saint Peter! Follow the link for the full list:

Ode to New York, or the Soundtrack of my like


I've always thought my life is a movie and that I have the soundtrack to prove it.

Okay, maybe not original score, but definitely in the same vein as Quentin Tarantino who uses old pieces for scoring his movies.

My first visit to New York was for a job interview in 2006. At the time, I hadn't boarded a plane in eight years and the stories of airport ordeals of post-9/11 terrified me, but the excitement to visit The Big Apple proved enough to overcome the worries. I prepared for the trip itself as much as for the interview. I believe what Aerosmith says that "life's a journey, not a destination."

The schedule called for a change of flight in Miami where I also had to go through immigration. Big mistake.Huge. The line snaked about a mile long, and then the guy in front of me had some sort of problem that necessitated the officer to call his supervisor. When I finally arrived to the gate, they were screaming my name in the P.A. and I was the last one to board plane and get the annoyed, some dirty, looks from passengers and crew.

I did not let my old but trusted portable CD-player embarrass me when I saw the plane practically flooded with iPods. When the Captain announced we were approaching JFK airport, I turned on my seat so fast I scared the lady sitting next to me. I switched CD's, skipped three tracks until I heard what I wanted. I sat back and relaxed. The plane landed while I listened to Frank's anthem to the city that doesn't sleep. Cliché? Perhaps, but I'd do it again.

After the job interview, I had some time off and went sight-seeing.

I walked from Grand Central Station all the way to the Intrepid Museum on 12th Ave. I was surprised to see the streets empty and not crowded as you see them in the movies until I realized I was one of the few people foolish enough to walk in the middle of a snow storm in early March. But hey, it was my first time with snow too.

A quick visit to Madame Tussauds wax museum boosted my ego when I discovered I was taller than all the Hollywood stars except for Harrison Ford. Well, I'll hold the claim on George Clooney as his statue was sitting down.

The cold weather played a part when I had to choose between Empire State Building and Central Park. No regrets as I visited Central Park the next trip during early Fall. It was picture perfect!
One thing I never found out was why they call it The Big Apple. Whenever I asked people just looked weird at me.

Overall, the experience was exhilarating that I used the city as setting for two of my novels.
In FIREFALL, the main character is a member of the FDNY, although he then has to move to Dallas. And of course, what better city than NYC to make the introduction of my character, the thief The Falcon in TREASURE HUNT, here is the opening paragraph:

Frank Sinatra heralded New York as “a city that doesn’t sleep.” There wasn’t a more accurate description of the Big Apple as far as Falcon was concerned. Even in the wee hours of the night, one could always find businesses running, factories producing, convenience stores open, people working the graveyard shift. Overall, New York was a city of contrast, people struggling to survive rather than to live happy lives. With over twelve million souls in the city, it was easy to disappear, to blend in. One could walk the streets without risk of being found—assuming that the other side was not looking too hard anyway.

So you see, to me New York City has a charm, a glamour you can't find elsewhere.


I can picture you, dear reader, right now saying, “Oh no, another rant about how he writes,” but you can be appeased as I will make this a quick entry and not one of encyclopedic proportions with every nook and cranny of the research bit I had to dig.

First off, you must be informed who to blame for this. Who but a dear friend would have put me up for this, right? Well, right. I’ve known Catherine Lea for a couple of years now. We met in a virtual gathering, a haven for beginners and experienced alike, named Backspace. Of course, she living in New Zealand and I in Honduras had prevented a face-to-face, but I think we know each other well, and we’re also fan of the other’s book.

My writing process is similar to the one she describes here, although with some differences:

First I come up with a theme, a title, the seed, whatever you want to call it. Usually, it begins with a what-if. As I was feeding a bottle to my then-six-month-old son, he spilled some milk over his lip forming a mustache, a rather short one that will forever be associated with the antichrist of World Word 2. So I though, he looks like Hitler, only by this time he should be his grandson. What would happen if Hitler had had children? Did you hear the click? I did, and that thought became the basis for a novel I wrote in Spanish titled Heir of Evil, about a fictional son of Adolf Hitler. The theme for FIREFALL, was the comeback road for a broken here, my first vision of the story was when my character loses his wife and son aboard a jetliner.

After I decide on a topic I sit down and write a short bullet list of the things that will happen, you know, the major shifts in the story. The list also serves as the basis for my subsequent chapter list that will serve as basis for the synopsis. That list also serves as a guide to pinpoint issues I need to research, define the characters—I confess it pretty much feels like holding a casting session for a Hollywood movie.

Then it is the writing of the first draft. This section of my process varies, it can be as short as forty days (well, rather nights), or it can expand over the course of years. It all depends on what other projects I have to work on. For writing I need a good space, and music. I don’t have a problem with people talking around me, I can tune them out. The only distraction is when they actually expect me to response. For instance, I’m writing this blog while sitting in a crowded restaurant and the TV is playing a football game, Brazil versus Colombia.

After the first draft is done, I print it, or transfer it to my kindle—the point is to use a different format, and work on the second draft. That draft is the one that goes to beta readers, trusted friends with no qualms to tell me where I’m wrong. Then it is out for final line-editing with another trusted friend.

At this stage it is when my two previous books started to be sent to agents and publishers, so there comes a period to follow the instructions on the back of the bottle of shampoo: rinse, wash, repeat.

For short stories that I have published directly at Amazon, the previous step is sort of skip over, but it is replaced for a more thorough set of revisions, searching for good cover artwork, and planning the promotion tour.

And that is it, in a nutshell.

During the very last Backspace Conference in 2013, author Jonathan Maberry told the attendance some serious truths, the one that stayed with me the most is this one: writing is an art, publishing is a business.

Now for the tagging, I’d like to exact my revenge—I mean tagging—on the following marvelous authors: J.E. Taylor, Ian Barker and Alex Shaw.

Now off to watch the most appropriate movie for today.

A Review, just in time with a Promo

Not only did Coffee Time Romance gave FIREFALL a rating of 4 steaming jave cups, but Rebel e-Publishers has joint forces with Smashwords to bring a wonderful promotion that will last until March/08.


CTR calls Firefall “… a taut, compelling mystery with a complex, well-drawn main character… The tension is subtle but undeniable, making this a crackling and enjoyable read.”

Read the complete review at:
http://www.coffeetimeromance.com/BookReviews/firefallbyjhbogran.html#.UxDNF-NdW7w

Or read a sample chapter at Suspense Magazine http://suspensemagazine.com/blog2/2013/10/04/special-excerpt-by-j-h-bogran-firefall/

FIREFALL is at $0.99 while two short stories are FREE

With the support of Rebel e-Publishers, my latest novel FIREFALL is currently going through a $0.99 promo week. The price will be kept until Feb/09, so take grab your copy while you can.

You can get your copy at either for these links:

Of course, if you want a peak before spending your dollar, here's a excerpt published by Suspense Magazine:
http://suspensemagazine.com/blog2/2013/10/04/special-excerpt-by-j-h-bogran-firefall/

At the same time, we are running a couple of FREE promos.

Deeds of a Master Archer will be free as an Amazon Kindle from Feb/04 until Feb/06.

About the story: Former marine Douglas Rhodes and tech wizard Tom Stevenson started the day struggling to move a washing machine in suburban California, but they'll have to finish it in a strange land battling dragons.
When they inadvertently interrupt the sacrifice to calm the local dragons' appetite, they become the besieged village's last line of defense against the flying fire-spitting terrors.
Forget finding a way home, now they fight to stay alive!

Get your copy here:
http://www.amazon.com/Deeds-Master-Archer-short-story-ebook/dp/B009DPAO7C

The Assassin's Mistress will be free as an Amazon Kindle from Feb/07 until Feb/09.

About the story:A random encounter leads to deception, love and murder. While vacationing at a ski resort, professional hitman Robert Prescott meets a strange and beautiful woman.

They discover passion and embark into a dangerous game hiding their relationship from her powerful husband. Then a further twist of fate makes Robert's occupation collide with his new found love.
Get your copy here:
http://www.amazon.com/Assassins-Mistress-short-story-ebook/dp/B007BOC0OW

Hope you are able to take advantage of this deals.

And please don't forget to leave reviews after you're done, they are the best way to support authors.

My contribution to February edition of The Big Thrill, an interview with author Maggi Andersen.