Please join Amy Gail Hansen and myself at the ITW Thriller Roundtables as we discuss our favorites social media sites:

Feel free to join in the conversation by leaving comments and messages either here in the blog or at the ITW site.

This collection comprises diverse characters on both sides of the law, from rougue FBI agents, to proffesional assassins, and everyday men and women facing impossible odds.

I strongly recommend popcorn and soda as companions while delving into these stories.

J. H. Bográn shows more than his writing chops in these succinct yet compelling stories filled with a mix of nitty-gritty action, twisted endings, and thought-provoking topics that will stay with the reader long after finishing A Dozen Shorts.
--Loretta Giacoletto, author of A Collection of Givers and Takers

A Dozen Shorts packs the punch of a thousand boxers. Bogran's wry Fleming-esque humor sets the tone for this varied collection. Comprised of classic noir gems, high-action thrill romps, and thought-provoking grit pieces, these stories will keep readers mulling them over long after they've read them.
--Gina Fava, author of The Race

Grab your copy at AMAZON 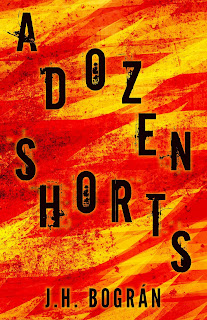